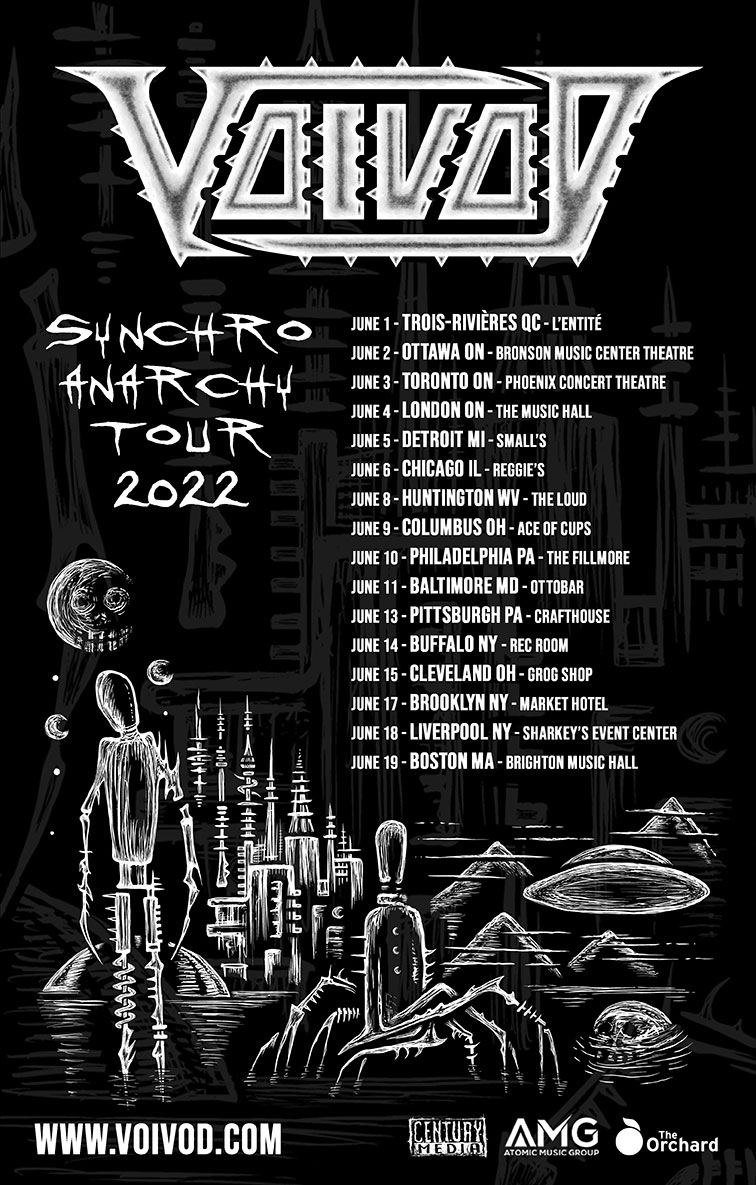 Today, legendary metallers and Juno Award-winning band VOIVOD announce tour dates across Canada and the USA for this coming June. Tour dates are in support of the band's new album Synchro Anarchy which debuted at #2 on Billboard Canada's Hard Music Albums chart, #6 Current Hard Albums in the USA, #7 on the UK's Rock & Metal chart and charted #7 in Germany among other countries including Austria, Switzerland, Finland, Belgium, and The Netherlands. The tour will kick off in Trois Rivieres, Quebec on June 1st with 16 dates to follow and will wrap up on June 19th in Boston, MA. All ticket info and links can be found at THIS location. Synchro Anarchy is available to listen to and purchase HERE via Century Media Records.

Michel "Away" Langevin (drums) comments on the tour: "At last! After more than two years without touring, we are finally hitting the road in June 2022 in North America. We are thrilled to play the Decibel Magazine Metal & Beer Fest, It will also be exciting for us to play songs from Synchro Anarchy for the first time live! We can’t wait to see our old Voïvodian friends again and meet some new ones. See you then!"

Synchro Anarchy is Voivod's 15th studio album and was just released this February. The album saw praise from some of the world's top journalists and music outlets including being named, "Canada's Founding Fathers of Metal" by Canadian Musician Magazine, "reigning champions of progressive thrash metal," by Kerrang! and, "another essential listen in the long line of essential listens Voivod have delivered since 1983", by Metal Hammer. It also saw 10/10 reviews from Northern Transmissions, Blabbermouth, and 9/10 from Exclaim Magazine, and Ghost Cult Magazine to name a few. Among the raving reviews, the album also received support from CBC Radio, Sonic Perspectives, Decibel, Metal Injection, La Presse, The Metal Voice, Angry Metal Guy, Consequence, George Strombo, Jason Rockman and more!